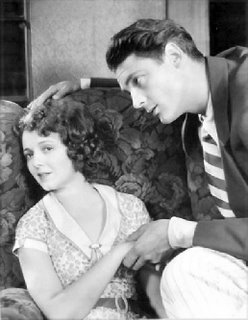 Janet Gaynor and Charles Farrell were teamed again in Sunny Side Up (1929), one of the first film musicals. Farrell and Miss Gaynor had starred -- successfully -- as a romantic couple in three silent films, so it must have seemed a "natural" pairing when Fox cast them in this, their first musical film. Gaynor plays Molly, a girl who lives happily in the New York tenements, and she gets things rolling with a charming rendition of the title song. Farrell is Jack Cromwell, a handsome Long Island millionaire who drives into Molly's neighborhood on a lark one evening, and is instantly smitten with her.

He doesn't know, of course, that secretly, Molly has worshipped him from afar after cutting his photo out of the newspaper. They meet cute -- he wanders into her apartment while she's still in her lingerie -- and after that, they get along famously, though she's in love and he thinks merely that Molly is "a swell girl."

All that changes, though, after Molly goes to Long Island at Jack's request -- properly chaperoned by her best galpal and two trusted male friends. As they get to know each other, Jack comes to realize he truly loves Molly; but now there's a barrier between them, for she thinks he is merely pitying her for being poor.

There are plenty of good songs, all written by the formidable team of DeSylva, Brown, and Henderson: In addition to the title song, we hear "I'm a Dreamer (Aren't we All)" sung by Miss Gaynor; "If I Had a Talking Picture of You," sung by both stars; and, in a big production number, "Turn on the Heat," sung and danced by dozens of girls who go from wearing parkas and heavy boots to stripping down to bathing suits, as the set warms up to tropical temps.

Sunny Side Up is probably the first film musical that isn't a "backstage" musical. All the songs and dances take place in what passes for real life.

Farrell and Miss Gaynor can't really sing, of course. But they could both carry a tune, and they were both charmers. And, as Samuel L. Jackson would say, several decades later, of an entirely different creature, "A little charm can go a long way."