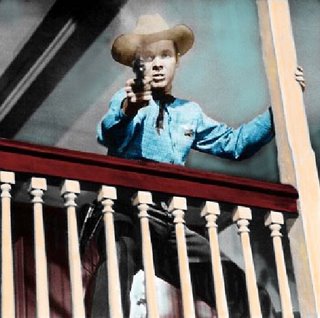 Destry Rides Again (Universal, 1939) is usually accorded near-mythic status in books and film commentaries. It teamed James Stewart, a hot new star fresh from his triumphant Mr. Smith Goes to Washington, with the glamorous Marlene Dietrich in the story of a gun-hating deputy sheriff who succeeds in cleaning up a lawless town. The film was so well-received, its title is nearly always mentioned in lists of the great films of that banner year, 1939.

But Destry Rides Again is not the last word. The film was remade as Destry fifteen years later by the same director, George Marshall, this time in Technicolor, with Audie Murphy in the central role of the gun-shy deputy. The slick patina of the Stewart-Dietrich version, combined with the celebrated legend naming 1939 as Hollywood's Greatest Year, have worked to downgrade the 1954 Destry in the public's mind as an inferior remake. It is nothing of the sort. Destry is a near-classic Western, complete and satisfying in every way, and it boasts performances that in some ways eclipse the efforts of the 1939 cast.

In the old West, a small frontier town named Restful is anything but. Hooligans roam the streets freely, random gunplay erupts everywhere, and peaceful citizens live in fear for their lives. The town has an overworked sheriff, but the real power in Restful resides with Phil Decker (Lyle Bettger), a corrupt saloon owner who is the equivalent of a big-city crime boss. Decker and his cronies operate in league with the slimy local mayor (Edgar Buchanan, magnificent in a rare villainous role) and Decker's own dance hall girl, Brandy (Mari Blanchard, so luminous she almost gives corruption a good name).

When the sheriff tries to interfere in one of Decker's crooked schemes, Decker has the lawman casually gunned down. Then, to insulate himself from further interference, Decker arranges to have the town drunk, Rags Barnaby (Thomas Mitchell), named the new sheriff, thinking he will be ineffectual. But Rags surprises everyone by taking his new appointment seriously. He goes on the wagon, then sends for Tom Destry, the son of a former two-fisted lawman, to be his deputy.

Tom Destry (Audie Murphy) arrives in Restful, looking nothing like the swaggering he-man the sheriff had in mind. In fact, Destry doesn't even carry a gun. The new arrival is soft-spoken, polite and deferential, the antithesis of the intrepid Western hero of legend. And Destry does let himself get pushed around -- by Decker, by his gunsels, even by the femme fatale, Brandy. But director Marshall is just setting us up, and we know it. We watch in silent glee, waiting for the inevitable moment when the worm will turn, and the meek will inherit the earth. When Destry's controlled rage surfaces at long last, he smites the villains mightily, with a vengeance that out-Shanes Shane.

Marshall's chief asset in this retelling of the Destry story is, of course, Audie Murphy. In World War II, Murphy had won the Congressional Medal of Honor for valor in combat, as well as 23 other decorations; and yet, this heroic fighting tiger turned out to be diminutive and baby-faced. Standing no more than five feet eight, with the angelic face of a well-scrubbed choir boy, Murphy must have seemed a "natural" for the role of the reluctant gunfighter Tom Destry. As it turned out, not only was his physical appearance ideal for the role; his acting style, always low-key, fit the Destry mold perfectly.

James Stewart was, of course, one of the finest actors ever to appear in American cinema, and he was eminently qualified for most of the roles he played. But at well over 6 feet tall, he towered over his fellow cast members in Destry Rides Again, and was by nature unable to project the vulnerability his role demanded. (Perversely, the casting department gave the role of Destry's chief nemesis to the shorter-than-average Brian Donlevy.) Stewart also had a habit of punctuating his most intense dramatic moments with the dark, wild-eyed visage of a deranged man. We can see that look in It's a Wonderful Life (1946), when Stewart's George Bailey is confronted with a nightmarish vision of the world, and in that sequence his expression was most appropriate. But he uses the "crazy George Bailey look" four times in Destry Rides Again, and it's unsettling, because we never expect to see the easy-going, nonviolent Tom Destry look that unstable.

Audie Murphy's Destry is, by contrast, calm and friendly even in his most trying moments, as when he is forced to break up some recreational gunplay by local toughs. Instead of glaring daggers at them, he smiles and graciously asks the men to let him borrow their guns. Amused, they decide to humor the pint-sized pacifist by handing him their guns, because up until now they have had no reason to fear him. All that changes, as Destry rapidly empties the pistols by picking off twelve tiny furniture knobs from a distance, in a dazzling display of marksmanship. In that instant, the lamb shows his fangs. It's a defining moment in the film. Even if you knew it was coming because you saw the 1939 version, it still catches you by surprise because this time around, Destry has seemed like such a powerless little pussycat.

Mari Blanchard sparkles as Brandy, the amoral saloon queen. She plays Brandy with a sexy exuberance, perhaps mindful that she was enjoying the best role of her career, after a string of small parts in B-pictures.

Brandy is an intriguing puzzle: A bad girl who cheerfully aids and abets her lover, Decker, as he runs crooked poker games and fraudulent land schemes -- but who is nevertheless attracted to the peace-loving Destry and his basic decency. Blanchard also gets to sing and dance to three numbers composed for the film by Frederick Herbert and Arnold Hughes, although an upbeat tempo can't disguise the fact that one of the songs, "Bang! Bang!", is basically the same tune as "See What the Boys in the Back Room Will Have", sans Dietrich's husky vibrato.

Destry's dramatic stability is provided by the redoubtable Thomas Mitchell, as the town drunk turned sheriff. The veteran screen actor had won an Oscar (for Stagecoach, 1939) and two nominations, and was clearly the class of the Destry cast. There is hardly a moment in any of his scenes when he does not own the camera. Every inflection in Mitchell's voice, every nuance of expression, is done with authority. Watch him in the scene where Rags Barnaby is informed, upon being awakened from a drunken stupor, that he has been named the new sheriff. He steadies his bloodshot eyes, firms his jaw, flings away the bottle he was holding, and declares, in the voice of a man who's trying desperately not to sound inebriated, "A man's got to choose between th' bottle and th' badge!" And with head held high, he marches away on wobbly legs that haven't quite sobered up yet. It's a moment of bravura acting by an old pro who understood what screen presence was all about.

But the enduring image in Destry is of Audie Murphy as the quietly courageous man of peace who, in the end, is forced to take up arms against the forces of evil. The moment when Destry finally, reluctantly, straps on his gunbelt and heads out the door to take care of business is one of the great scenes in Western films. It is beautiful, as justice is beautiful. And we have been so carefully set up for this moment that we are no longer sophisticated observers; we are little children, cheering in the knowledge that soon, all the ugliness will be wiped out, and the world will be a happy place again.