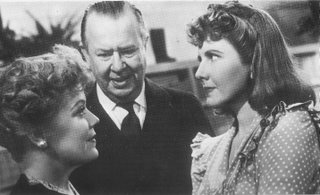 When I first watched The Devil and Miss Jones (1941) years ago, I liked it so much I didn't want it to end. I couldn't believe that a black-and-white comedy made so long ago could have the power to move me like that. The depth of my affection for the film is reflected in the fact that, just recently, I saw it for the second time ever... and I felt just as strongly about it as I did the first time.

Charles Coburn plays J.P. Merrick, the richest man in the world, who lives in comfortable isolation in his New York mansion. He's so wealthy that he doesn't realize he owns Neeley's department store... until one day, the newspaper runs a story about Neeley's employees demonstrating for better working conditions. To add insult to injury, they've hoisted an effigy of Merrick.

"That dummy doesn't look anything like me," grumbles Merrick to his servile board of directors. He decides to go undercover, gain employment at his own department store, try to worm his way into the employees' confidence, and "root out the troublemakers!"

Spoilers coming. Okay, now Merrick -- calling himself "Tom Higgins" -- has a job as a shoe salesman, and he's learning who the offenders are among the employees. Much to his surprise (but not to ours), he comes to like them. The "Miss Jones" of the title is Mary Jones, a salesperson played by Jean Arthur at the peak of her considerable powers. She's kind to "Tom." Her boyfriend Joe (Robert Cummings) is the ringleader of the demonstrators, but he's not the fire-breathing agitator Merrick was expecting. He's warm, friendly, and only wants what is best for all the employees.Then there's Elizabeth (Spring Byington), a lady close to Merrick's own age, and he learns to like her enough to consider proposing marriage. But, in a critical scene one evening on the subway, Elizabeth confides to "Tom" that she could never marry a man with money. It's against her principles. Of course, at that point, she thinks he's a poor man.

There are plenty of comedic subplots here, and director Sam Wood steers them skillfully. One has Tom and Mary being arrested for minor offenses on the Coney Island boardwalk, then Joe shows up at the police station and advises the cops that they are in violation of the U.S. Constitution. Funny stuff. But don't worry, this isn't an anti-establishment film, it's an anti-injustice movie. Joe is a fellow who knows right from wrong, and Mary loves him for that.

Finally the day of reckoning comes, when Merrick will have to reveal to his new friends who he really is. In the hands of some hack director, this scene could have crashed and burned, taking the movie with it. But to our great delight, Wood makes it a truly memorable epiphany.

And in this, the film's penultimate scene, Coburn himself delivers the funniest line in the movie. In context, it is funnier than any line I've ever heard. And, although I've warned of spoilers, I won't repeat his line here. Nothing should prevent you from the joy of hearing it for the first time, when you finally see The Devil and Miss Jones.
Posted by Dan Navarro at 6:38 PM