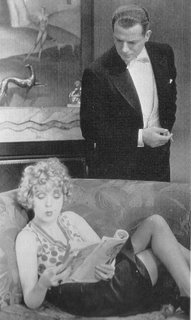 
Mary Pickford's Kiki (1931) is not generally considered one of her best films, but I found it thoroughly enjoyable. Probably this was an attempt by the legendary Ms. Pickford to "jazz up" her image. Long gone were the billowy curls of her early films, where she played young girls even after she was in her thirties. Here, she sports jazz-age bobbed hair, plays a flirtatious chorus girl, and is clearly a woman "on the make" -- though chastely -- for the character played by her costar, Reginald Denny. Quite a departure from Mary Pickford's "America's Sweetheart" persona.

I've said that in Kiki, Ms. Pickford tries to "jazz up" her image. Here, she shows us her legs (which were "not bad" for someone only 5 feet tall); she removes her brassiere from beneath her blouse while standing in front of Denny; and in a later scene, she sits in front of his male assistant in her lingerie and unconcernedly puts on her stockings, slowly, one leg at a time.

The film is lively and kinetic, almost a slapstick comedy. Ms. Pickford delivers kicks to various backsides, among them Reginald Denny's and Margaret Livingston's, and gets kicked herself. Twice, Ms. Pickford is seen falling on her rear end. She even tumbles off the stage and into the orchestra pit, landing seat first into a drum -- a stunt her friend Charles Chaplin would use, years later, in Limelight (1952). I thought everyone in Kiki was extraordinarily game. They were all obviously hoping to make this film hilarious.

Unfortunately, Kiki flopped at the box office, and Ms. Pickford would make only one more film -- Secrets, another flop. The writing on the wall was now more legible than ever. Maybe the public felt that, at age 38, Ms. Pickford was reaching a little too hard for the youth serum. The era of "America's Sweetheart" was over.

But she left behind a legacy of great performances, and a great public enthusiasm for America's first major female movie star.