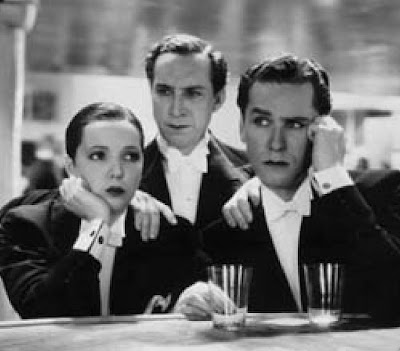 
By now, it is probably not possible to review the sparkling Jessie Matthews musical First a Girl (1935) without referencing Blake Edwards’ 1982 smash hit Victor/Victoria, since they were both based on the same story (by Reinhold Schünzel). The Edwards film became so popular, it threatened to erase memory of Miss Matthews’ 1935 tour-de-force as well as the original film of the story, Germany’s Viktor und Viktoria (1933). Ironically, a modern viewing of the Matthews vehicle actually wins new respect for Miss Matthews' performance.

For one thing, First a Girl makes no mention of homosexuality. While the Edwards film is fueled by gay jokes, the Matthews version shows us that the subject of female impersonation is perfectly legitimate outside the lavender world.

Miss Matthews, who had her breakthrough role in the spectacular British musical Evergreen (1934), is here serviced by the two gents who helped to secure her star persona in that film: director Victor Seville and cinematographer Glen MacWilliams.

In First a Girl, Jessie is Elizabeth, a girl with a good singing voice and dancing talent who yearns for a show business career, but keeps getting turned down at auditions. Frustrated, she breaks down and cries one rainy afternoon at a coffee shop in a seedy London neighborhood. There, she is comforted by Victor (Sonnie Hale), an aspiring Shakespearean actor (read: ham) who pays the bills by doing a drag act on stage.

As it happens, Victor has caught a cold in the rain, and he’s lost his voice. So, he convinces Elizabeth that she could replace him in the act, with himself as her "manager," and no one need be the wiser.

Her act gets off to a rocky start due to stage fright, but eventually she belts out her song with confidence, and wins over the raucous audience. All manner of things go wrong in the wings, though, and soon a flock of geese are swarming the stage; someone knocks over a vat of liquid paste that coats the performing area, and Elizabeth (as Victoria) slips and falls – a neat pratfall that is shown in one take, meaning it was really Jessie Matthews who took the tumble and not some anonymous stunt woman. The audience roars its approval, thinking it’s all part of the act.

When, at the end of the act, Victoria removes her wig and reveals the short haircut that marks her as a “man,” the audience is stunned for a moment… and then, they go wild again, applauding the performer who had them so badly fooled.

A certain Mr. McLintock, a high-class impresario who’s slumming in hopes of finding a good act for his upper-crust audiences, happens to catch “Victoria’s” act. He visits her and her “manager” back stage, and offers them a contract. Elizabeth, it seems, is on her way to fame and fortune – just as long as she continues pretending she is a man pretending to be a woman.

Fame and fortune does come her way, and Victor’s too. Together they tour the continent, wowing audiences everywhere they go. At a ritzy stop on the French Riviera, they encounter the glamorous Princess Mironoff (Anna Lee) and her wealthy fiancé Robert (Griffith Jones). Robert is much taken by Victoria when he sees her on stage, much to his fiancée’s amusement. She knows that “Victoria” is really a “man," but Robert does not… until the end of the act, when “Victoria” takes off her wig and exposes the impersonation.

But the deception ends one sunny afternoon in the waters of the Mediterranean, when Elizabeth goes for an ocean swim. It seems Robert is out for a swim that day too. When she encounters trouble and begins to drown, Robert rescues her and carries her to shore. There, as he deposits her unconscious body on the sand, he cannot help but notice her swimsuit and the feminine curves it displays. Now the secret is out.

Following this exposé, she returns to the club to perform her act as usual. And it is one of the strengths of First a Girl that here, when Elizabeth’s fear of her future is so severe, she delivers the film’s most glorious number: “Everything’s in Rhythm With my Heart,” a beautiful song (by the team of Maurice Sigler, Al Goodhart and Al Hoffman) that should have become a popular standard and might have, had it been performed in an American musical of that era. The song is followed by an elaborate dance routine involving dozens of chorus girls, highlighted by a brilliant solo turn by Jessie Matthews, the “Dancing Divinity” of English cinema.

Now that the cat’s out of the bag, Robert proposes to Elizabeth, she accepts, and together they set out to motor back to England. At a border stop, they are asked to show their passports. When the official sees her passport, he exclaims: “But this passport is for a MAN!” To which the beaming Elizabeth replies, “Yes, but first a girl!” And they drive off.
Posted by Dan Navarro at 11:08 PM

One of my favourite English films, a gem quite continental in its sensibilities, and as such a rare thing indeed to find in the English cinema of the thirties (or indeed any period!)

Hi Chris... Thanks for sending your comment. In addition to the "continental" content, I find "First a Girl" very instructive in the manners of proper people in the thirties. Remember the scene where Robert punches the Sonnie Hale character, thinking he had been sleeping with Jessie? Today, alas, such a matter would have been glossed over in the movies.

For over twenty years, I have owned a good 16mm print of "First a Girl" (1935). It just might be Jessie Matthews' best performance.