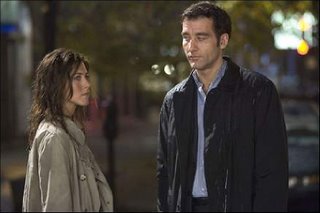 WHY is this film lambasted by the critics?

I've said I'm a big fan of classic films, but I still watch for good NEW films. One of the best I've seen lately is the 2005 thriller Derailed, starring Clive Owen and Jennifer Aniston.

I caught this on one of the Starz channels, got hooked on the film's noirish suspense, and watched it all the way through. When the film was over, I went straight to the computer to see what the professional critics had to say about Derailed.

But what a disappointment! With very few exceptions, the pros gave it a "thumbs down." They said it's "derivative." Well, yes, it is. Double Indemnity (1944) comes to mind. So does Fatal Attraction (1987). So too, intensely, does Lawrence Kasdan's Body Heat (1981). But the way things are handled is so entertaining, we should be able to just relax and enjoy this new riff on a familiar old tune.

The good news is that there are several independent commentaries posted to the IMDb, by individual viewers, and they are almost all positive.

As I've said, I thoroughly enjoyed it, and thought Clive Owen and Jennifer Aniston both did a good job of playing against type. Owen, so tough and mean in Sin City (also 2005), here plays a simple -- maybe even a little simple-MINDED -- married business exec who gets distracted by a lovely brunette. Cocktails lead to dinner, then to a hotel room where they plan to satisfy their lust. I did NOT expect that -- SPOILERS ALERT -- about one second before penetration, the would-be adulterers are disrupted by the entrance of a brawny thug who threatens to blow Owen's brains out, then pistol-whips him to unconsciousness.

And NO, I certainly did not predict that, once Owen has been dispatched, our little Jen -- the romantic sweetie from "Friends" and about a dozen movies where she played, essentially, the same role -- would then get brutally and graphically raped. Anyone who tells you they PREDICTED all this is, well... a liar.

I think that, when detractors of Derailed engineer their stories about how "predictable" this film is, they're thinking about what happens AFTER the rape. Yes, it did occur to me, in the minutes that followed, that the Jennifer Aniston character may have been "in on" the whole scheme to rob the Clive Owen character. It turns out that she WAS in on it. Big time.

But that revelation, startling as it is, doesn't come at the end of the movie... it comes two-thirds of the way through! There is still the dicey business of seeing how Owen's character will avenge the beating/robbery/rape, so there's really no reason to walk out of the theater, or to change the channel. With a setup like that, don't people want to see how the whole thing plays out? Does Owen get his revenge? Does the villain return to menace him again? All these issues are resolved, and, to my mind, resolved satisfactorily, by the final fade-out.

Sort it out, and you might just agree: Derailed is a Fatal Attraction for the 21st century.
Posted by Dan Navarro at 8:46 PM

Hi - here from Julie's blog! I, too, really liked this movie. It was creepy, disturbing, unpredictable (to me, anyway) - everything I like in a suspense film.

Hi Jana... Sorry to be so late getting back to you. My bad.

You and I are like most folks who are not professional film critics. We enjoy the strangulating creepiness of the situation the hero finds himself in.

As I said in my commentary, I think "Derailed" is a "Fatal Attraction" for the 21st century.

The film's only flaw, to me, was the dismissive way it treated one of today's great British actors, David Morrissey, who plays the john that Jennifer Aniston picks up near the end. He is only in the film for a few minutes, but he will dazzle you in such British fare as the 2008 miniseries "Sense and Sensibility."