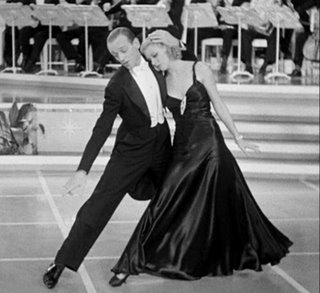 "Roberta" was one of the major musical triumphs of the 1933 Broadway season. Set in a glamorous Paris between the two world wars, the play oozed romance, elegance, and continental sophistication... or at least enough of those qualities to divert attention from its absurd plot. A winning score by Jerome Kern lifted "Roberta" several stratospheres above its banal libretto; a good thing too, because without that boost, the show might never have been translated to the screen to become the perfect showcase for the talents of Fred Astaire and Ginger Rogers.

Reams have been written, and will continue to be written, about the superb dance partnership that was Astaire and Rogers. In their initial pairing as supporting players in Flying Down to Rio (1933), they captivated the public, and soon became the movies' favorite dancing couple. But a quirk of fate has, until recently, shrouded what is arguably their finest collaboration, in RKO's 1935 movie version of Roberta.

Because M-G-M bought the rights to the musical in order to create its own version, Lovely to Look At, in 1952, the RKO movie was kept off television and off video dealers' shelves until the 1990s. Whole generations of film fans have grown up loving Fred and Ginger in classics such as The Gay Divorcee (1934), Top Hat (1935), and Swing Time (1936) without ever savoring the one film -- Roberta -- that really established Astaire and Rogers as superstars. This is dancing at its endlessly watchable best.

The plot, such as it is, concerns American football player John Kent (Randolph Scott), who inherits his aunt Minnie's successful dress salon ("Gowns by Roberta") in Paris. There, he falls in love with the firm's head designer, Stephanie (Irene Dunne), who turns out to be an exiled Russian princess in disguise. Boy gets girl, boy loses girl, then girl storms back like the cavalry in the last reel to save the faltering business by staging a mammoth fashion show, complete with beautiful models, and lots of singing and dancing. Finis.

Fred Astaire plays Huck Haines, a struggling bandleader and the hero's best pal. Ginger Rogers is Huck's old childhood flame Lizzie Gatz, who is in Europe masquerading as a Polish countess, Tanka Scharwenka. Perhaps because they have little responsibility for carrying the burden of the plot, Astaire and Rogers seem positively liberated in their roles, and their dancing together seems more spontaneous than ever.

Lizzie, using her fake title as leverage to persuade a reluctant impresario (Luis Alberni), gets Huck's band a job at the Cafe Russe, where she sings as Countess Scharwenka. Then, during a rehearsal session with the band, Lizzie sings the Jerome Kern-Bernard Dougall ditty, "I'll Be Hard to Handle", complete with phony accent and much sly humor... and in so doing, she launches one of the great Astaire-Rogers dance duets. The song is sweet and hot, two choruses and it ends, and we think the number is over. But it isn't, yet. While the band vamps lightly, Huck and Lizzie begin a friendly conversation, reminiscing about the old days; then, in the most casual, spontaneous way, they begin dancing together. Lightly they sway, then so gradually that we don't realize it's happening, their dance becomes a major musical event.

Arlene Croce, author of a definitive volume on Astaire and Rogers, says of "I'll Be Hard to Handle": "This is the big event of the film, the number in which 'Fred and Ginger' became fixed screen deities." It certainly gets your attention. They start with a rhythmic shuffle, then after eight bars he gently takes her by the waist and together they spin around and around, settling at last into one of the most brilliant and inventive tap duets ever filmed. Halfway through the number, they separate and have a tap "conversation", each taking a phrase, then each responding with a salvo of taps. The band strikes up a bugle call, and Rogers snaps to military attention, only to be distracted by Astaire's invitation to resume their buoyant pas de deux. They continue the breathtaking duet as the music rises to a new wave of excitement; then, just as our hearts are ready to burst with exhilaration, they whirl one last time and collapse into two chairs.

As satisfying as the number is, "I'll Be Hard to Handle" seems to resonate with us out of all proportion to its value as a screen event, to move us in a way few movie dance numbers ever have. Now that we have video that can be played and replayed endlessly, at last we can put our finger on the number's special ingredient: The entire sequence -- three minutes of exquisite skill and grace -- is filmed as a single shot, with no breaks in the action, no skewing of camera angles, no interruptions in the flow of the dance. Knowing that Astaire was a perfectionist who sometimes demanded as many as eighty takes before pronouncing a dance number fit to be seen, we can appreciate how pleased he must have been with this particular take, to let it occupy three minutes of uninterrupted screen time, with no cuts. And he was right: This performance is perfection itself. There would be other great dance duets by Astaire and Rogers, and by other dancers; but prophetic title and all, "I'll Be Hard to Handle" would be tough to top.

"Smoke Gets in Your Eyes" is probably the most famous of the Roberta songs. In the film it is sung by Irene Dunne as Princess Stephanie, and is later reprised as a romantic adagio by Astaire and Rogers. Astaire once told this reviewer that he didn't like to do love scenes -- and, sure enough, there are very few conventional love scenes in the Fred Astaire oeuvre; he always preferred to express his feelings for his partners through their dances. His choreography for "Smoke Gets in Your Eyes" is like a love scene, treating Rogers both like a queen and like a delicate rose. There is a moment where they walk side by side, he pressing her head lightly against his shoulder. The dance casts a powerful spell, but it is kept short, and it ends with us wanting more.

The climactic fashion show, showcasing the new gowns by Roberta's dress salon draped on several gorgeous models (Lucille Ball among them), is played out to "Lovely to Look At", a romantic ballad written by Kern for the film. Irene Dunne sings while the models parade their stylish frocks, and soon afterwards the temporary conflict between Stephanie and John Kent is resolved. The lovers embrace, romance is in the air, and it seems to be contagious; even Huck and Lizzie make tentative plans to marry.

RKO, which was gleefully raking in the gate receipts from the previous Astaire-Rogers film, The Gay Divorcee, while Roberta was in production, wisely chose to close Roberta with a shot of Astaire and Rogers, the new superstars, rather than the top-billed Irene Dunne. The die was cast. Cite Flying Down to Rio as the first film to pair this extraordinary duo. Credit The Gay Divorcee for being their first starring vehicle. But salute Roberta as the film that finally distilled the essence of Astaire and Rogers, and sent their lucky star spinning into permanent orbit.