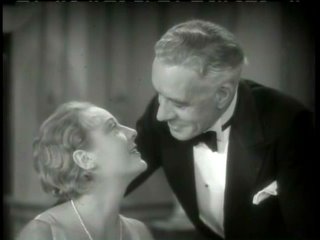 The Office Wife (1930) puts the beautiful silent screen actress Dorothy Mackaill into sound pictures and introduces Joan Blondell to the screen. For those laudable achievements alone, this film deserves kudos.

But it really earns its welcome by presenting a charming story about wealthy businessman Larry Fellowes (Lewis Stone) who, though married, finds himself falling for his private secretary, Anne Murdock -- the "office wife" of the title -- in the person of Ms. Mackaill.

Anne likes him too, and we are treated to an exquisite tension between them, as they go about the firm's business, each of them falling more and more in love with the other, yet having to remain very businesslike in their relationship.

Finally Larry gets up the nerve to give Anne a kiss... but before you holler "employee harassment!", take a good look at Anne's posture just before the kiss. She is totally asking for it. She puts her face close to his, and her body language practically DARES him to kiss her. He does. What to do now? Joan Blondell, as Anne's sister, learns that Fellowes' wife is planning to divorce him -- for reasons unconnected to Anne -- so Joan gives her sister's boss a phone call, letting him know that Anne has "fallen for her boss," without explicitly naming him. Our gal Joan knows how to set up a situation.

I didn't signal "spoilers" at the start of this commentary, because I think that's unnecessary. We know from Anne and Larry's first meeting that these two are going to wind up together. One may say that Lewis Stone is "too old" for Dorothy Mackaill, and in truth he was her senior by 24 years. But they are very "simpatico" together, and are a winning couple. Sort of like Michael Douglas and Catherine Zeta-Jones in the modern day.

Dale Fuller, who played tragic females in Souls for Sale (1923) and Greed (1924), plays another one here, as a secretary who secretly yearns for Larry's love. Maybe Ms. Fuller was typecast, but she certainly did play that sort of role well.

In this precode, we get to see Joan Blondell put on her stockings, slowly, one leg at a time... a scenario that she would duplicate in several other films of the era. The act became so familiar that, in Foothill Parade (1933), she threw the folks a switcheroo, putting both stockings on the same leg. "Accidentally," of course.

The Office Wife clocks in at just under one hour in length, making it one of the shortest and most enjoyable precodes ever.
Posted by Dan Navarro at 8:21 PM

I agree totally, and I think that this film has Dorothy Mackaill's best performance, in some films her line readings can be flat, but in this film her emotions register as very real and moving. Kudos to Mackaill and to Dan for his perceptive review!

Thanks Barry!
There is something about precode films, isn't there, that stirs the juices a bit more than during the fabled "Golden Age."