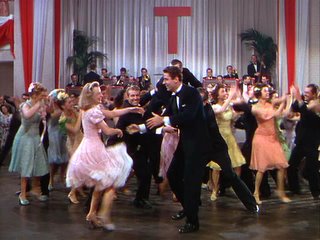 What a delicious find! Although Good News is a Technicolor musical, a genre I love, the film has no first-rank musical stars such as a Gene, a Fred, or a Judy. No Howard Keel or Kathryn Grayson. No Doris Day. No Frank Sinatra. Nevertheless, Good News is a gorgeous musical entertainment, and deserves mention among the best musicals of its generation.

The tiny (5 ft. 2 in.) June Allyson, she of the smoky voice and perpetual smile, stars as Connie, a coed working her way through Tait College. She likes Tommy Marlowe (Peter Lawford), a football player who seems like a nice guy; but while helping him with his grades so he'll be eligible to play in The Big Game, she learns that he's smitten with Pat, a scheming gold digger who thinks Tommy's family is worth millions.

With a set-up like that, you already know the rest: Tommy learns he really loves Connie, but she spurns him, thinking he's in love with Pat. In the Big Game, Tommy plays badly, and Tait is about to lose, until... good girl Connie gets bad girl Pat out of the picture, Tommy is energized to play his All-American best, Tait wins the game, Connie wins Tommy, and the whole school celebrates with singing and dancing. The end.

That simplistic plot -- echoed in dozens of movies over the years -- might have sunk Good News but for the energetic treatment it receives. Little Tait College is displayed in glorious Technicolor hues; the songs by Buddy DeSilva, Lew Brown, and Ray Henderson are first-rate; and the choreography (by Charles Walters and Robert Alton) is eye-poppingly spectacular.

Best of all, first-time director Charles Walters (who would later helm such musical hits as Easter Parade [1948] and High Society [1956]) kept the film moving briskly, with not a dead spot in sight.

Walters also displayed a cinematic virtue I wish more directors would use: He liked to let the shots run long, and would not "cut" a scene until absolutely necessary. Orson Welles and Woody Allen were advocates of this "long cuts" approach. So is Robert Altman, on occasion. But in Good News, Walters used it to perfection.

Consider the two big production numbers, "Pass That Peace Pipe," sung and danced by Joan McCracken and Ray McDonald, and the big finale "The Varsity Drag." Both numbers use dozens of singers and dancers, both are colorful and energetic, both employ intricate dance movements. And yet, there were only TEN CUTS in each of these mammoth production numbers! That means the dancers and crew had to perform their jobs perfectly, because there was almost no opportunity to "cover up" mistakes by simply cutting away, and then cutting back again.

By comparison, look at a modern musical: Chicago (2002), the Oscar winner of a few seasons ago. In just one big number, "The Cell Block Tango," director Rob Marshall used more than TWO HUNDRED cuts! Even in the relatively short finale number, "Hot Honey Rag," there were 72 cuts. This MTV-style editing has captured the imagination of today's young directors, who must think all viewers are afflicted with ADD and can't concentrate on scenes that last longer than two seconds. But there was a time when continuity of image and action mattered in musicals. Charles Walters showed he prized that continuity, with his masterful treatment of the dances in Good News.

It isn't the same as sitting in a theater seat, watching a dance number on stage. You get to see it all the way through, from start to finish, yes; but because you are rooted to that theater seat, your view of the action is always the same. In Walters' movie, the camera swoops, it pans, it tracks... giving us continuity of action, but also a subtly changing angle to it. Walters' masterful alchemy took a routine plot and transformed it into a spectacular viewing experience.

Even without Gene, Fred, or Judy, Good News is one of the best musical films of Hollywood's storied Golden Age.