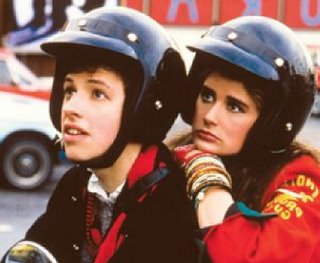 About halfway through No Small Affair, there's a scene where Laura, the singer played by Demi Moore, belts out a knockout rendition of the Madeira/Dorsey standard, "I'm Glad There Is You." It's a jazzy paean to romance. Watching the movie again recently, I was jolted when Laura sang the line about "underrated treasures", because it's a capsule description of the film itself. No Small Affair, unheralded in its day and rarely revived since, is itself a treasure, a gem among the gravel of cynical 1980s films.

It's a coming-of-age tale, chronicling the conversion of Charles Cummings (Jon Cryer) from gawky teenager to confident young adult. Nothing new there, except that director Jerry Schatzberg and screenwriters Charles Bolt and Terence Mulcahy have fashioned a charming film that sings with a bittersweet passion about Cummings' wrenching transformation. His catalyst is Laura, the 23-year-old saloon singer played by Demi Moore. With her youthful yet worldly manner, and her scratchy violin voice playing its siren song on Cummings' sensibilities, the lad is a goner. What ensues is a funny and endearing rite-of-passage story with brilliantly clever complications.

Cummings -- he prefers not to be called Charles -- is a 16-year-old amateur photographer who likes to shoot pictures of colorful San Francisco locales. One day, when Laura and a friend wander into camera range, Cummings waves them off, but not before he's snapped a few shots of Laura's beautiful face. Seeing that face later in his proof sheets, Cummings is hooked.

Infatuated beyond reason, Cummings searches for his new beloved. He begins by staking out the dock where he first saw her. After several hours of fruitless waiting, he sulks: "Someone said, if you stand in one spot long enough, the whole world will pass by. I don't know who said that, but he's an idiot."

Fortune finally smiles on Cummings on a night out with his big brother Leonard (Peter Frechette) and Leonard's fiancee Susan (Elizabeth Daily). Armed with a fake ID, Charles joins the pair at a downtown nitery, and there, on the tiny stage, the object of his affections warbles into a hand mike, barely audible above the blare of a heavy-metal band. But the next morning, Cummings' exhilaration at finding Laura is tempered by the news that her band is breaking up, and the lady may wind up out of a job.

Worlds above Cummings in sophistication, Laura nevertheless turns to her new friend for comfort when her career goes sour. One afternoon, she accedes to his request to pose for his camera, and we can feel their deepening friendship as the hours pass by and Cummings shoots roll after roll of film, happily taking pictures of this glowing Circe in front of some of San Francisco's most picturesque landmarks. Night falls, and the pair are tired, hungry, and broke. So they decide to crash a wedding reception and help themselves to food and drink. When they are caught by the father of the bride (Hamilton Camp) and threatened with arrest, Cummings makes a deal with the irascible paterfamilias: Let Laura sing for their supper. She does... and, to everyone's surprise, including Laura's, her rendition of a classic ballad (the above-mentioned "I'm Glad There is You") is a big hit. Who knew this grunge diva could sing pop?

This revelation inspires Cummings to take drastic action. Rounding up his life's savings, he pays to have Laura's likeness and telephone number posted on taxicabs all over the city. He's hoping the publicity will attract attention to Laura's talents, but at first it seems only to attract heavy-breathing weirdos. Exasperated, Laura pulls her phone out of the wall. But a newswire service picks up the story about the young fan and his generous gesture and prints it, and soon the phones are ringing off the wall at Laura's old place of business. The bar owner, Jake (George Wendt), pleads with Laura to return and sing at his establishment. She agrees, but she is still furious with Cummings.

Laura's "debut", in front of a packed house that includes record company talent agents, is a success. She is offered a recording contract, and the possibility of stardom beckons. But now, in a neat reversal of the first half of the film, the hunted becomes the hunter, as she tries frantically to locate Cummings and thank him.

What makes No Small Affair so winning is the delicious array of comedy performers director Schatzberg has united for his film. Jon Cryer, making his first film at age 19, has all the right moves, whether making sheep's eyes at his costar or doing a nifty moonwalk upon receiving a bit of good news. Demi Moore, in her first starring role, makes Laura tender/tough, a savvy woman who combines a strong sense of independence with a most touching vulnerability. (In one climactic scene, Laura wraps her arms around her young benefactor and says, "When I grow up, I want to be just like you.") It wouldn't be the last time Demi Moore enchanted a younger man.

Among the supporting players, none resonates more delightfully than Judy Baldwin as Stephanie, the elegant call girl Cummings meets at his brother's bachelor party. Baldwin's bit is little more than a cameo, but her luminous and hilarious scene with Cryer will be remembered long after most of the other performances are forgotten.