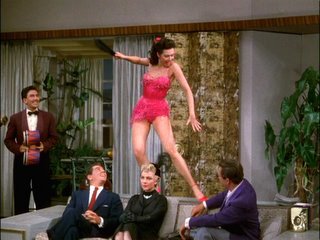 It's a moviegoer's maxim that, when a film is based on material from another medium -- a book, a play, a TV drama -- the movie will always be inferior to the source material. But that tired notion is eclipsed, if not demolished, by M-G-M's Kiss Me Kate (1953), a sparkling and energetic version of the 1948 Broadway musical triumph written by Sam and Bella Spewack, with a dazzling score by Cole Porter.

Much has been written over the years about the charm and durability of Porter's melodies and the cleverness of the Spewacks' libretto. Well-deserved tributes, both; but not enough has been said about the imaginative ways in which the movie version of Kiss Me Kate improves on the stage original. The Spewacks crafted an ingenious, double-tiered story about a play within a play, in which the stars' backstage bickering mirrors the bickering of the characters they play on stage. For the movie, Dorothy Kingsley re-fashioned the libretto into a seamless shooting script that "opens up" the story and smooths out some of the rough edges.

The story concerns a troupe of actors performing a musical version of Shakespeare's "The Taming of the Shrew". The male star and director of the show, Fred Graham (Howard Keel), was once married to his leading lady Lilli Vanessi (Kathryn Grayson), for whom he still carries a torch. Lilli is temperamental and a spitfire, but still capable of great affection if a man proves himself worthy of it. In this uneasy atmosphere, they launch their new collaboration: He as Petruchio, she as Katharine, the shrew Petruchio must tame.

Complicating matters is the presence of a supporting actress, Lois Lane (Ann Miller), who is to play Bianca, the younger sister of Katharine. Lois and Graham have a light flirtation going, but she is no more constant than Lilli is; in fact, Lois is semi-engaged to Bill Calhoun (Tommy Rall), a dancer who will play Lucentio in the show.

The first evidence of Kingsley's genius (and of director George Sidney) is seen right after the opening credits. In a scene not in the stage original, the fade-in takes us to Fred Graham's apartment, where he is welcoming Lilli, Lois, and Cole Porter himself (in the person of actor Ron Randell). They discuss doing the show, Fred and Lilli sing the beautiful love duet "So in Love", then Lois does a sizzling, take-no-prisoners tap routine to the lively "Too Darn Hot". The dance is so spectacular, as Lois whirls about the room in a skimpy red dress trimmed with fringe, it invariably draws wild applause from the audience whenever the film is revived. Today, "Too Darn Hot" is usually cited as "the definitive Ann Miller number" by fans of her musicals.

Dazzling though her dance routine is, Lois is soon informed by Graham and Porter that the song has been taken out of the show. "There's no place to put it", explains Porter. That might have been an in-joke in 1953, because in real life that was almost the fate of the song, in the original stage play. "Too Darn Hot" has no real place in the narrative of the show, so it is usually sung by a chorus of dancers performing between acts of the play within the play. It was considered so expendable that, in 1958, when NBC-TV staged a performance of Kiss Me Kate as part of its prestigious Hallmark series, "Too Darn Hot" was simply dropped from the show. But it lives on, spectacularly, in the movie.

Howard Keel's Fred is self-absorbed and vainglorious, but at least he isn't the insufferable ham played by Alfred Drake in the stage play. Drake's broad, extravagant gestures may have played well to the balcony, but in a film, restraint is called for, and Keel provides it admirably. Grayson, for her part, gives us an interesting Lilli/Katharine, a shrew with a heart. In both roles, she lets us see her own vulnerability, even as she is throwing dishes or throwing a punch. This is a shrew made to be tamed, by the right man.

When Fred and Lilli's bickering escalates into all-out war -- on stage, on opening night, in front of a packed house -- she ad-libs insults, slaps, kicks... until finally, exasperated, Fred puts his ex-wife and co-star across his lap and gives her a sound spanking in front of the footlights.

But Fred Graham's "triumph" is short-lived. Backstage during intermission, Lilli belts him again, then defiantly announces that she is walking out on the show. He does manage to keep her onstage (through a comedic subterfuge), and by the fade-out, you get the feeling that these two sparring partners are ready to hang up their gloves. Somehow, you doubt that their fragile egos can survive together for very long; but for now, at least, all is Edenic bliss.

Good as the leads are, the movie version of Kiss Me Kate belongs to the dancers. Ann Miller had the best role of her career, and she responded with some of the finest dancing ever seen on the silver screen. In this, she had a formidable team to work with: Choreographer Hermes Pan, and fellow dancers Tommy Rall, Bob Fosse, Bobby Van, Carol Haney, and Jeannie Coyne. Miller's dance duets with Rall are sharp and inventive, in particular "Why Can't You Behave?", danced on a Manhattan rooftop (another example of the camera's ability to "open up" a scene), and the slyly erotic "Always True to You Darling in My Fashion" (Pan makes a brief appearance here, as a sailor on the prowl).

As was customary in M-G-M musicals in the Golden Age, the best number is saved for last; and a delectable treat it is. In one last, bravura display of the film's superiority to the stage play, the final dance number uses a song, "From This Moment On", that was not in the original play, but was lifted from a 1950 Cole Porter show, "Out Of This World". It is an inspired choice. Hermes Pan uses all six lead dancers in a brightly-colored, lively and kinetic mating ritual, with the dancers taking turns pairing off in separate pas de deux. Tommy Rall and Ann Miller dance the first sequence, giving way to Bobby Van and Jeannie Coyne. Then, for the third duet, we get to see the only dance in the movie not choreographed by Hermes Pan. This is Bob Fosse's turf: We see Fosse and the wonderfully agile Carol Haney take center stage in a finger-snapping, back-flipping, jazzy interlude that sets the screen ablaze. Their duet lasts only about one minute, but for that minute the screen is on fire.

Katharine's final speech is truncated Shakespeare: "I am asham'd that women are so simple... To offer war where they should kneel for peace....", but Grayson makes the most of it; and, in yet another triumph of the screen version, this time the speech is spoken rather than sung, as it was in the play. This allows Katharine to put a neo-feminist "spin" on the words, implying through inflection and gesture that Petruchio may have tamed his shrew this time, but he had best watch his step in the future. This is no surrender, it's a marital detente. And it is the genius of Kiss Me Kate -- both the play and the film -- that we feel the story's happy resolution on two levels at once: Between Petruchio and Katharine, and between Fred and Lilli. That's the magic of great story-telling, and it is the particular magic of Kiss Me Kate.