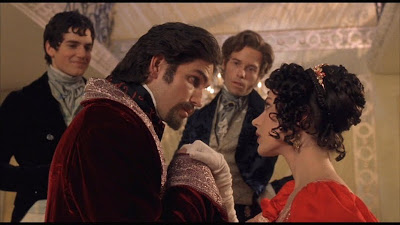 THE COUNT OF MONTE CRISTO (2002)
A Film Review
by Dan Navarro
Copyright 2010 Dan Navarro
When a motion picture is based on a literary work of art, film critics invariably separate themselves into two opposing camps. One insists that the film must be a rigorous adaptation of the book, a near-slavish adherence to the words on the page. The other camp allows the film to be a film, with all the cinematic flair that makes the movie attractive to audiences of the time.
Kevin Reynolds' The Count of Monte Cristo (2002) belongs in the second category. Based on the renowned classic by Alexandre Dumas, it tells an epic tale of love, betrayal and retribution. Purists may deride the modern liberties taken in the name of entertainment, but they cannot deny that the basic outline of the book remains intact... and yes, a modern film viewer who hasn't taken the time to slog through the more than 1,500 pages of the original work, can still enjoy this story of sweet revenge, exacted in a most colorful fashion.
Dumas' classic has been adapted for the screen no fewer than a dozen times, beginning with a one-reel silent version in 1908. Before the Reynolds film, perhaps the 1934 version starring Robert Donat was considered the best adaptation, especially in the last half, where Edmond Dantes' fearsome vengeance is being carried out. (The worst adaptation, hands down, is the sappy 1975 TV version starring Richard Chamberlain.)
Edmond Dantes (played by James Caviezel in the 2002 version) was a lovable but simple and perhaps naive French sailor in Napoleonic times. He and his friend Fernand Mondego (Guy Pearce) sail out to the island of Elba, and there Dantes meets the famous exile Napoleon, who gives him a letter to deliver to a friend back in France. The guileless Edmond meekly accepts the letter and promises to tell no one about it.
But back in France, the letter falls into the hands of Villefort, the local magistrate, who immediately charges Dantes with treason. He has the gullible sailor arrested and shipped off to the infamous prison island, the Chateau d'If, there to spend the rest of his life in lonely captivity.
Edmond spends the next 13 years in his dungeon cell, but fortunately meets a fellow prisoner, an old priest named Faria (Richard Harris, in his final role). Faria is no ordinary priest. Apparently he is skilled in the martial arts, in philosophy, in literature. Over a period of several years, Faria teaches Edmond the art of swordplay, teaches him to read, and tells him of an uncharted island on which is hidden a limitless fortune, more money than one could spend in 20 lifetimes. Even better, Faria has a map showing the location of the treasure.
But the Abbe Faria is growing old, and his long confinement has taken its toll on his lungs. He dies in his cell, leaving Edmond the treasure map. Edmond knows the prison guards will take away the body, so he substitutes himself in its place. The guards obligingly carry the shroud out to the cliffs and toss it into the ocean. Once underwater, Edmond cuts his way to freedom.
After acquiring an assistant, Jacopo (Luiz Guzman), in a knife fight with some pirates, Edmond sets sail for the tiny island of Monte Cristo, uncovers the hidden treasure, and becomes wealthy beyond his wildest dreams. But the desire for revenge against his betrayers festers in his heart. Dantes harbors resentment not only against Villefort, but also Danglars, a former ship captain who sold him out, and especially against his former "best friend," Fernand Mondego, who not only aided in the villainy to get Dantes imprisoned... but who has also married Dantes' former love, the beautiful Mercedes (Dagmara Dominczyk).
Edmond hatches a devious plan. Renaming himself the Count of Monte Cristo and buying the grandest estate in Paris, he hosts an elegant "coming out" party, inviting all the nobles and their ladies, including two men he has particular interest in seeing again: Mondego and Villefort.
Make no mistake, Caviezel earns his acting stripes here. In the first act, Dantes had been a humble, soft-spoken working sailor. Now, more than 13 years later and enriched with not only a fortune but also with a grand new sense of confidence, the formidable "Count" dazzles his party guests, impressing one and all. No one from his past recognizes him, partly because of the passing years but also because he now sports a handsome, neatly trimmed mustache and beard. He is sophisticated and bold, as unlike the old Dantes as night is from day. Caviezel makes us believe it.
With the help of Jacopo and his pirate friends, Dantes sets up Danglars and gets him arrested by the French military. Next, he takes his vengeance on Villefort, in the unlikely setting of a steam room where Villefort is basking. Dantes, though fully clad, turns up the heat to an unbearable degree, and Villefort is cooked until done.
But the juiciest revenge is saved for the final act, when Dantes confronts his former "friend," Fernand Mondego. After letting Mondego learn his true identity, Dantes engages him in a rousing, prolonged sword fight. Years earlier, Mondego had easily bested Dantes in swordplay; but now, Edmond uses all the moves and cunning taught to him by the Abbe Faria during his long imprisonment. Furiously, the two men buckle their swashes in a grandly choreographed and lengthy duel that begins indoors, then moves outside... where Edmond gets his final revenge at last.
There is one other surprise at the ending, but it's best for you to discover it for yourselves. I've written that Jim Caviezel comes of age as an actor in this film; but Guy Pearce also shines, serving up what is, in context, the best line in the movie. It's only one word, but Pearce's delivery will make you shiver. The word is: "Premature."
Posted by Dan Navarro at 10:51 PM