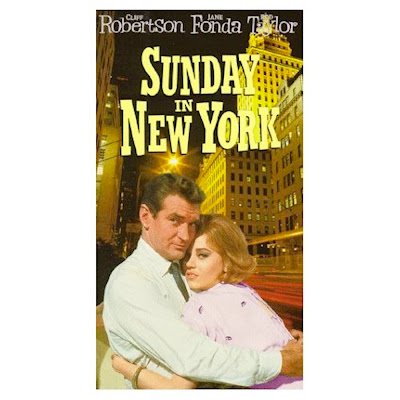 Produced right on the cusp of the sexual revolution in America, Sunday in New York (1963) probably stirred the libidos of many viewers. Previously, it was considered improper for young people to indulge in sex before they got married. But by 1963, with many couples challenging that taboo, the subject was due for another assessment. And it got one, in this clever and charming Peter Tewksbury romantic comedy, based on a script by Norman Krasna.

Jane Fonda plays a 22-year-old virgin, Eileen. She's just lost the man of her dreams, Russ (Robert Culp) because he wanted sex before marriage and she refused. Now she's traveled from her home town of Albany to New York City, to visit her brother Adam (Cliff Robertson). Little sis wants to get big brother's views on the subject of extra-marital sex.

On the 5th Avenue bus, Eileen meets Mike (Rod Taylor), and they go to get coffee together. Caught in a rainstorm, the two are drenched, and with no umbrellas and no taxis in sight, they have no choice but to repair to Adam's apartment to dry off.

After some nervous conversation, Eileen decides to try and seduce Mike, if only to get the "virginity" monkey off her back. He's all for the sex, until he discovers -- at apparently the last moment -- that she is, er, a "beginner." Infuriated, Mike retreats to the safety of his bathrobe, then lectures the girl on the perils of seduction when one is a virgin. Eileen asks, logically, "Well, how is a girl supposed to learn?"

Good question. But there's no time to discuss it, because just then, who should burst into the apartment but Russ, all the way from Albany to propose marriage to Eileen, whom he has decided he cannot live without. Russ has never met Eileen's brother, so seeing the two together in the apartment -- in their robes -- he assumes that Mike is Adam, and begins joshing with him and treating him like a future brother-in-law.

The fun escalates when the real Adam comes home and discovers that Mike has co-opted his identity, and must now call himself "Mike" and pretend to be his own best friend.

Rod Taylor is very game about his role in this film. He gets punched and knocked down by both Culp and Robertson, is drenched repeatedly in New York City's rainstorms, and is made to be Eileen's fall guy when the whole charade falls apart. Still -- SPOILERS AHEAD -- at the end Taylor's Mike gets to romance Fonda's Eileen, and the film appears headed for a happy ending.

But Mike had to go through hell before he could find his heaven, in the arms of Eileen.
Posted by Dan Navarro at 12:35 PM