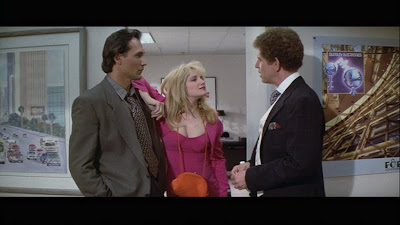 Have you ever wished for a modern movie that could deliver a strong, uplifting spiritual message without being boring? Once upon a time, could accomplish that feat with ease. But in today's sex-and-sensationalism market, films with spiritual themes are mocked, patronized, or even worse, ignored. That's why Blake Edwards' 1991 comedy Switch (Warners-HBO Films) is such a serendipitous find: A bawdy rib-tickler with ribald humor aplenty, yet one that delivers the spiritual goods too.

To be sure, the fabled Edwards raunch is intact in Switch. The film is sexy, funny, and cheerfully vulgar. But there is a sweetness here also, a frank admission that some things are more important than animal appetites, for example the salvation of one's soul. Against all odds, Switch not only delivers that message, but does it in a positive, exhilarating way that rivals the best work of Preston Struges and Frank Capra.

In Switch's opening reel, a smug chauvinist named Steve (Perry King) is murdered by three women who once loved him. Steve's soul descends into purgatory, where he is informed by God that he cannot gain admission to Heaven until he atones for his many offenses against womankind. So Steve is returned to Earth for his second chance, with the admonition that he cannot enter Heaven until he finds one female who likes him. To make things tougher, the womanizing Steve is reincarnated as Amanda (Ellen Barkin), a gorgeous blonde with the sort of dynamite body that has been Steve's lifelong playground.

What ensues is a comedic tour-de-force by Barkin, who is splendidly funny as a man trying to cope inside a woman's body. She wobbles shakily on stiletto heels, struggles to sit demurely in short skirts, and suffers a storm of sexual confusions when confronted with Steve's former girlfriends. Even when Amanda is with a genuinely nice guy (Jimmy Smits), she cannot warm up to him, because inside she still thinks like a man.

But the comedy is being played out against a deadly serious bass motif, the struggle for Steve/Amanda's immortal soul. Satan wants it too, and he appears to Amanda with an offer to release her from her tortured existence, if she will consent to join him forever in Hell. Horrified, she refuses. But she knows, and we know too, that her time is growing short; for after weeks of searching, she has failed to find one female who likes her in either incarnation.

Edwards, who wrote and directed Switch, was a prolific filmmaker who often turned out edgy comedies (The Pink Panther, S.O.B., Victor/Victoria), but with Switch he seems to be going for something new: mixing farce and spirituality. Even the way he treats the Devil is witty. Satan, played by Bruce Martyn Payne, seems to show up everywhere Steve/Amanda goes, sometimes in disguise, sometimes not. Audaciously, Satan even shows up in drag, playing the piano at a lesbian party.

In the early 1940s, Preston Sturges' seriocomedy Sullivan's Travels told the story of a man who is thrust into a world completely alien to his own, but a world in which he learns truths that would enrich his life forever. Frank Capra's superb It's a Wonderful Life (1946) used the same idea in a different way, making that movie a perennial favorite, one of the most loved films of all time.

Unlike the Sturges and Capra heroes, Switch's protagonist is no innocent, but an unrepentant heel suddenly challenged by fate to amend his miserable life. But this is precisely what makes the message even stronger. All souls are equally precious to God, are they not? Because Switch is a comedy, it does not seem unfair to disclose that in the end, the redeemed sinner does, indeed, gain admission to . But the twist that leads to this happy ending is wondrous, a plot element strikingly outside the standard routine of modern sex comedies. It is nothing less than an example of what is meant when people speak of the all-conquering love of God.

Edwards' deus ex machina is no heavenly puppetmaster pulling strings, but a benevolent God who helps those who help themselves. Seek and you shall find. To find that point driven home so forcefully in a '90s sex farce like Switch is more than surprising, it is miraculous. Sturges and Capra would have approved.

Thanks a lot, halpwr, for your positive feedback. I once approached a Christian publisher with my review of Switch, but after watching about ten minutes of the film, he stopped watching and told me the movie was filth. He should have watched till the end. This film is a powerful statement against abortion, and shows clearly that Amanda made the right choice. It got her into Heaven.
Wonder how many other pregnant women took that meaning to heart?
Cheers,
Dan