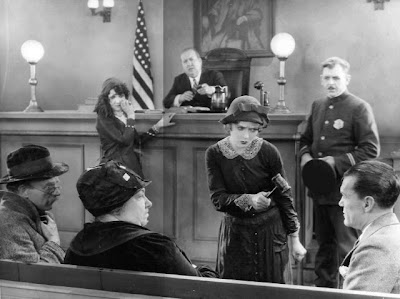 A Film Review by Dan Navarro

If you’ve heard of the Mary Pickford legend and wondered what all the fuss was about, look no further than My Best Girl (1927), Miss Pickford’s last silent film and, arguably, her best film ever.

Mary Pickford appeared in almost 250 movies and produced 30, besides several uncredited stints as writer and director. By 1920, the year she helped establish United Artists, she was the most popular female movie star in the world. In 1927, she became one of the founders of the and Sciences. In a word, she was .

It’s ironic that this Very Big Star – probably the biggest of them all – was physically tiny, standing just a shade over five feet tall.

In the wonderfully warm romantic comedy My Best Girl, Miss Pickford is Maggie Johnson, a stock room girl employed at Merrill’s Department Store. There’s a clever early scene where Maggie is asked to bring some kitchen pots from the stock room, and finds she can’t carry all of them; so she wears one of them as a shoe and brings it out that way.

Maggie falls for Joe Grant (Charles “Buddy” ), a new co-worker with a charming smile. His smile may be a winner, but as a stock room worker Joe seems a bit slow to learn. At one point, Maggie teasingly tells him: “You know, you’re awfully dumb!”

What Maggie doesn’t know is that Joe Grant is really Joe Merrill, the son of the store’s owner, working incognito to learn the business from the ground up. Young Joe is “engaged to be engaged” to an upper-crust girl named Millicent (Avonne Taylor), but she doesn’t seem to light Joe’s fire the way Maggie does. The two co-workers eat lunch together, sometimes sitting in a large crate in the stock room, and we can feel their love for each other growing.

There’s a charming scene where Maggie is riding in the open bed of a truck and Joe chases after her, running pell-mell down the street, trying to keep up with the moving truck. Director Sam Taylor and cinematographer Charles Rosher keep things lively with a long tracking shot that follows Joe on his run, with Maggie and the truck bed framed in the foreground. When Joe finally catches the truck, he climbs aboard and, thoroughly smitten, builds a “throne” for Maggie out of the crates and barrels on board. He even fashions an ersatz tiara for her to wear. It’s as if Rogers and Miss Pickford invented meet-cute.

Eventually, after a comic subterfuge that lands Joe and Maggie at the Merrill mansion, the truth comes out when Mr. and Mrs. Merrill return home unexpectedly. The terrified Maggie jumps into hiding under the dining room table, but to her surprise, Joe remains standing to greet the Merrills. Hearing their conversation, Maggie finally gets the picture: She’s been romancing the store owner’s son!