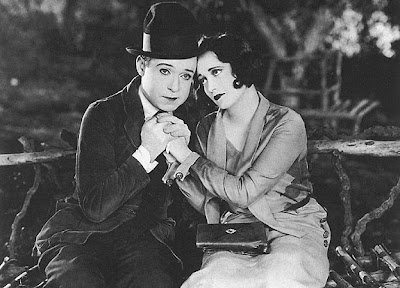 Harry Langdon was a supernova. As far as silent cinema is concerned, he was – this is the dictionary definiton – “an extremely bright, short-lived object that emits vast amounts of energy.”

Short-lived is right. Over the years, film researchers have remarked on the brilliance of this comic who came along and almost instantly challenged the greats of film comedy – Chaplin, Keaton, and Lloyd – and then quickly disappeared. Film historian Kevin Brownlow called Langdon “the fourth genius of screen comedy.” He was that, but for a very short period of time.

It’s a “thrill” moment that would do Harold Lloyd proud. Harry tries to escape his predicament by dismantling the fence with a hammer, but the darned thing falls apart and Harry rides it like a sled, down the hill, hundreds of feet down… and it lands right on the racing path, in front of the other contestants.

The racers rendezvous in . There, the shoe tycoon and his daughter greet the contestants and Harry, impulsively, steals a kiss from her. Joan Crawford reacts as if she’s just seen a wire coat hanger. But she lets it pass, and soon the racers are off again.

Tramp, Tramp, Tramp’s most spectacular scene comes after the racers have crossed what an intertitle calls “the great American desert.” A cyclone hits , and buildings are destroyed, cars are overturned, and the violent wind threatens to kill everyone in town. That would be too bad, because now Betty and her dad have arrived, and Betty finds herself trapped – alone – on the second floor of a building that is ready to collapse. Harry summons the nerve to climb the stairs and he carries Betty down to safety.

Then, seeing that the cyclone is still wreaking havoc, Harry starts throwing bricks at it. That’s right, bricks. He is thinking as a child would; but lo and behold, the cyclone responds by moving away from town and dissipating into the desert.

An intertitle reads: “David slew Goliath; Daniel tamed the lions; Joshua stopped the sun; and Harry made a cyclone take the air.”

At the finish line, the world’s champion walker, Nick Kargas (Tom Murray) appears to be on his way to victory… but this time, the perpetually late Harry puts on a determined sprint, passes him up, and finishes first. He wins not only the prize money, but also Betty’s hand in marriage. And that’s love.

It is so lucky that i come here accidently, the aundant resources makes me excited,thank you!
By Jordan Sneaker

You're very welcome, herana. If you love old, classic films, even the rare ones, you've come to the right place.