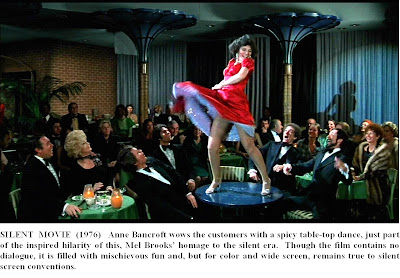 
Mel Brooks’ Silent Movie (1976), the first silent picture to be made in 40 years, strives to blend the director’s manic sense of humor with silent film conventions. Surprisingly, they make a good fit. Brooks’ comic repertoire doesn’t begin and end with witty double-entendres; here, he proves himself a master of physical comedy, too.

Brooks (who also co-wrote and directed) plays Mel Funn, a former film director who’s hit the skids, by way of the bottle. Now sober and seeking a comeback, he teams with his buddies, Marty Eggs (Marty Feldman) and Dom Bell (Dom DeLuise), to try to sell Big Pictures Studio (“If it’s a big picture, it was made here”) on the idea of making the first silent movie in 40 years.

The Studio Chief – er, make that the current Studio Chief (in Brooks’ universe, everything echoes the turmoil of real life) – played by Sid Caesar, thinks it’s insane to try to make money these days (“these days” meaning 1976) with a silent picture… unless the intrepid trio can talk some really big movie stars into appearing in it.

So off they go, in search of stars. Some of Hollywood’s big names do appear in this film, as themselves, and Funn and his pals nab all of them – Paul Newman, Liza Minnelli, James Caan, Anne Bancroft, Burt Reynolds – and they begin production of the picture.

But trouble lurks around the corner. Big Pictures Studio is on the verge of bankruptcy, and is a take-over target of Engulf and Devour, a ruthless conglomerate. (Brooks has stated, publicly, that any resemblance to Gulf & Western, which had recently swallowed up Paramount Pictures, is purely coincidental.) The only thing that can save Big Pictures is a major hit, and that’s just what Funn & Co. aims to deliver… unless Engulf and Devour can stop them.

That’s where E. & D.’s weasely CEO (Harold Gould) steps in and plots sabotage. Knowing that Funn’s two big weaknesses are women and liquor, he hires a “bundle of lust” – one Vilma Kaplan (Bernadette Peters) – to seduce Funn and drive him back to drink.

Silent Movie captures the spirit of the silent era amazingly well, for a film made in 1976. The opening scene shows the trio of Funn, Eggs, and Bell driving down a sunny, palm-lined Southern California street, and we don’t hear a single sound. I’ll admit that I suspected something must have gone wrong in the projection booth, because I was watching a motion picture, but hearing no sound, not even music. Brooks got me good, with that one.

We don’t hear any sound until their convertible coupe passes a giant billboard… and then the camera lingers on that billboard, to show us: “20th Century-Fox”… and the music begins, followed by the opening credits.

In 1948 James Agee wrote an essay, “Comedy’s Greatest Era,” extolling the virtues of silent era comedies when compared to the limp humor of talkies of the current period. Agee described the four main grades of a laugh: the titter, the yowl, the bellylaugh and the boffo.

An ideally good gag, wrote Agee, “would bring the victim up this ladder of laughs by cruelly controlled degrees to the top rung, and would then proceed to wobble, shake, wave and brandish the ladder until he groaned for mercy….”

Mel Brooks may have read that essay, for in Silent Movie he builds on his gags at every opportunity. In one scene, for example, Eggs (Feldman) is trying to board an elevator, but the door snaps shut just before he can get into it. He pushes the button again. Another elevator door opens and Eggs is ready to run – no, sprint – to it before it closes. But inside the elevator are dozens of doctors and nurses, filing out. Eggs must wait for them. He waits for what seems an eternity, but they keep coming. And coming. Nearly one hundred people, all emptying out of this one elevator. Finally only one person is left: a gigantic nurse with a malevolent glare. Eggs tries to sidestep her, but she’s too quick for him. Face to face, they continue to dance, her glare darkening all the time. Finally she moves away and the elevator door closes, leaving Eggs without a ride. Again.

That scene is a nice spin on a turn in a Harold Lloyd comedy, Girl Shy (1924), in which Harold is trying to board a trolley car but is shoved aside by hundreds of men who materialize out of seemingly nowhere. Later in Silent Movie, Brooks appropriates a gag of Charlie Chaplin’s, from Chaplin’s 1916 short, One A.M., when he does battle with a recalcitrant Murphy bed. (In a shabby edifice known, naturally, as the Hotel Sleez.)

Each of the guest stars gets a generous share of screen time, but the most sparkling is Anne Bancroft (Mrs. Mel Brooks in real life). She does a table-top dance in a night club, tangos with all three principals… and guts it out though she’s taking quite a beating. One moment, Funn is dancing with her and, when they dip, he bangs her head on a table. Later, she is being carried off stage – horizontally – by the three funnymen, who “accidentally” ram her head into a wall.

Vilma, the Bernadette Peters character, converts from femme fatale to a loving partner for Mel Funn. With Engulf and Devour now out of the way, the trio follow through and complete their movie. The night of the Sneak Preview, however, it is learned that the film has been stolen – and it’s the only copy!

Cue up some more jokes from Brooks & Co., enlivened by an encounter with a vicious Coke machine. That’s right, a Coke machine! This gag defies description; it must be seen to be believed. But with Mel Brooks at his manic best, the whole crazy cavalcade delivers some of the heartiest laughs since the real silent era ended.

Silent Movie was released to the public on DVD by Twentieth Century-Fox Video, making this consistently funny grab bag of comedy routines available for the first time.
Posted by Dan Navarro at 1:37 PM